Nowadays, new technical and economic challenges have arisen due to the constant growth of renewable energy. In electrical grids, one of the main goals is to increase the usage of transmission systems without lowering the quality and security standards.

Maximum renewable energy capable of being injected in a node or region strongly depends on the initial conditions and hypothesis stated in electrical studies. Usual criteria of considering minimum demand and maximum electrical generation in the area might result in excessively pessimist conditions, whereas defining operation scenarios in terms of energy or mean power (using installed power and load factor) could derive in wrongly optimist conclusions. Therefore, it is of highimportance to state the following:

By means of Montecarlo analysis, it is possible to give responses to thesematters and get quantitative results regarding probabilistic and complex issues. To apply this method, it is necessary to develop mathematical models that allow the representation of network component (generators, power transformers, transmission lines) and randomnesssources (loads and renewable generation farms).

The first part of the study contemplates the unrefined data processing of wind speed and solar radiation recorded in different places, in order to determine stochastic models that take into account seasons and hourly features of different regions, as well as their variability in different time frames. Similarly, stochastic load models in different areas are developed. Conventional generation and transmission systems are represented by deterministicmodels with restrictions.

From this point, hours, seasons and years of interest in the study horizon are simulated. This implies the random generation of thousands of study cases that, once processed, allows the determination of: mean values, deviations, renewable maximum generation points, estimation of schedule curves expected for conventional generators, transmission system power transfers, areas and timetables of heavy loaded links, utilization/plant factors, and other indices of interest regarding the evaluation of planned operation. 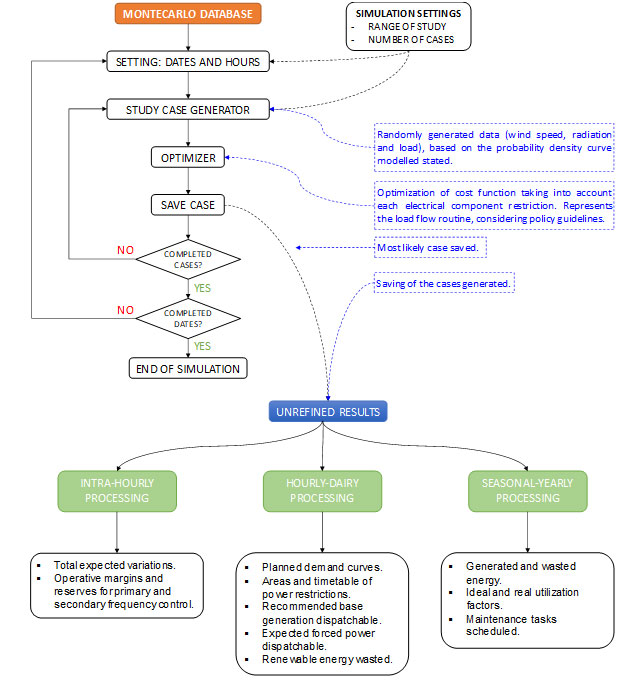 The following picture depicts optimum expected conditions for hourly dispatch, considering conditions of mean power, transference,and demand. These results are presented by plotting each magnitude variation during the entire day.

Finally, in a second part, a complementary analysis is added which allows the identification of different bottlenecks and electrical sub-markets creations with different marginal costs, that enable, at the same time, to get the necessary information for studying thetechnical-economic feasibility of new projects.

The picture above is an example of the analysisperformed for a particular day in a season and year under study in the SIC Chilean system,that showsthe injected power (box diagrams), theoccurrence probability of marginal cost in injection node and hourly mean energy associated with several marginal costs. As can be seen, during the night (21hs-9hs) most of the energy generated by the wind farm under study will be related with the marginal cost connected to SIC, even with ahigh probability of disconnection and forced LNG operation. During the day, generation restrictions are expected due to saturated transmission links that could imply both, margin cost lowering and renewable energy damping.